For this reason, the principle of the appearance of new games on the site will change. First of all, the championships of those countries will be released on the site, whose locals will help to do a translation into their native language. For example, the Hungarian language has already appeared on the site. And the people of Hungary received their championship in return.

So, guys from Brazil! If you help to translate the games and website into Portuguese, you'll receive Football Heads: Brazil 2022 as a thank-you.

I warn you in advance that the translation must be good. If you're unsure of yourself, you don't need to translate just because you want the game to arrive as soon as possible. That won't work.

An important clarification - you don't need to do thoughtless copy-paste machine translation using Google Translate, etc. I can do it myself :)

The texts are divided into blocks and numbered.

At the bottom of the page, you can see texts and comments. You can publish your translation in the comments, discuss it, and correct other people's mistakes.

Those nations that will completely translate texts will receive their games earlier than others.

Thank you for your attention!

2) Play quality online games. Dvadi is free entertainment for players of all ages.

4) Football Heads is fun and quick-played 2D game in which big-headed football players play one-on-one. Two footballers, a small football field, two football goals, and a ball. You only need to score as many goals as possible and defend your own goal.

5) Also, from time to time, bad weather conditions (wind, rain, snow) will complicate the game. In addition, disgruntled fans of your rival may pelt you with plastic bottles.

6)The website offers a lot of international and national championships such as the Champions League, Euro, World Cup, Copa Libertadores, English Premier League, La Liga, Bundesliga, Serie A, and others.

7) Miniball is a turn-based football game. Here you play as a team of five players (one of them is a goalkeeper). The footballers can move around the football field and hit the ball. Besides hitting the ball and moving players across the pitch as accurately as possible, you must also consider your strategy and tactics.

8) This way, you will be able to predict the possible steps of your opponent, timely reinforce your defense or attack, and correctly take positions on the playing field. In the Miniball series, you can also play various national and international championships.

9) Briefly speaking, Football Heads is more of a "quick" game about agility and fast reactions. Miniball, in turn, is more of a "slow" game "where you need to think over your moves." In any case, you will enjoy your time playing both games. Have a great time, and we wish you to win in football championships!

On this page, you can contact the site administrator.

Send Us A Message

This page has web games that you can freely publish on your website.

2) Miniball is an exciting soccer mini-game in which you can choose your favorite team and try to make it a champion. Each team consists of five footballers that look like real players. Four players can move around the entire field, while the fifth, the goalkeeper, can only play within the penalty area.

4) Mini task: try to guess each of the players. What are their names?

5) There is a puck at the bottom of each football player's figure, which is the main playing element. It allows you to hit the ball, bounce off the borders of the playing field, and contact the pucks of other players. For instance, except for hitting the ball directly, you can hit through the board, another player, or the opponent.

You need to demonstrate not only accuracy but also the ability to think over your next steps, as well as predict your opponent's moves. The mechanics of the game is somewhat similar to billiards and Subbuteo. 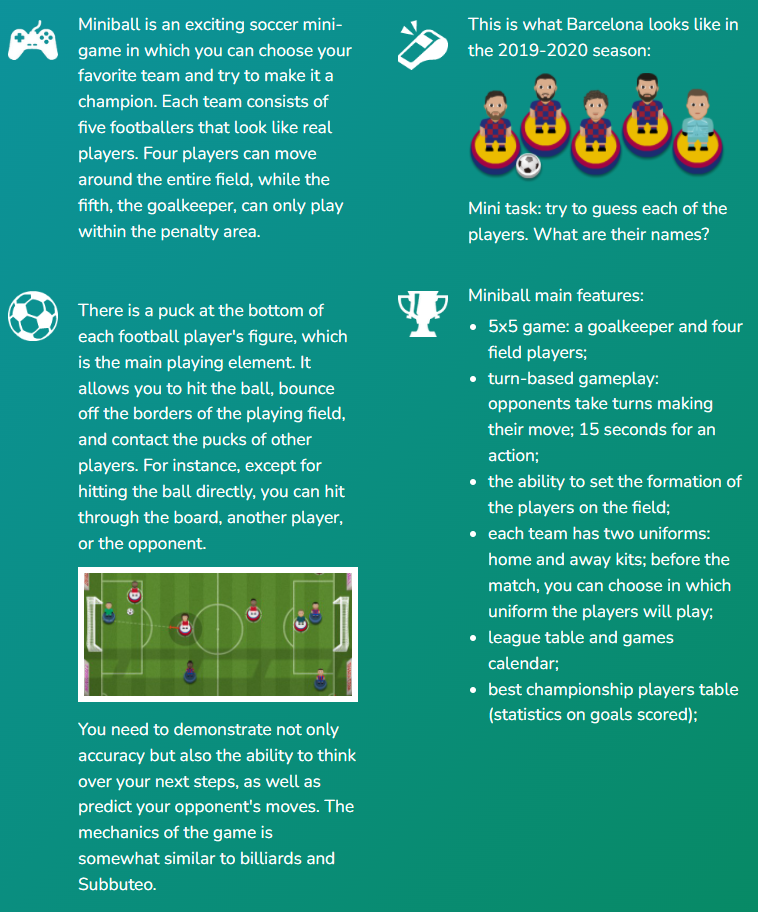 2) Can you guess them? These are football players Lionel Messi, Cristiano Ronaldo, and Mohamed Salah. This is what they look like in the game.

3) Yes, you got it right! All football players have big heads and only one leg. But this doesn’t prevent them from playing football. Start the game and check it out yourself.

4) Choose the tournament your favorite team is playing, and choose the player you want to play. You can choose from the Champions League, Copa Libertadores, World Championship, European Championship (Euro), or the strongest national championships in Europe and South America. Can you win all your opponents on your way to the title? 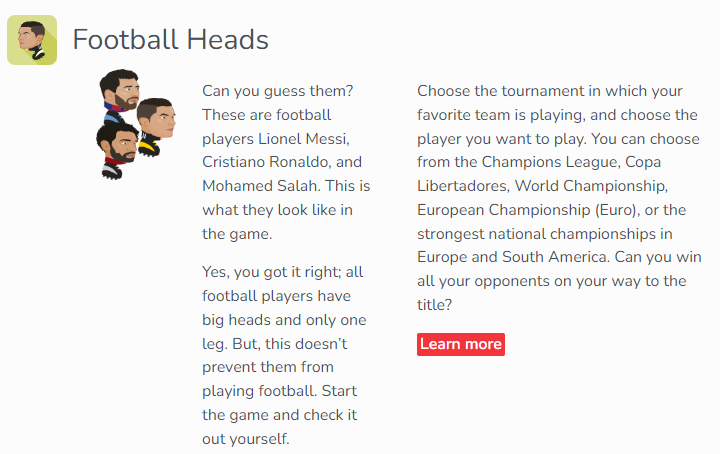 6)Football Heads is a free browser mini-game. To be more precise, it's a series of games. The vast majority of games in this series are real international or national championships. Each new football season, starting in 2014, includes new games in which the list of competing teams or clubs changes and the players' lineup. By the way, the most popular championships on the site are the European Champions League and World Cup.

7) You can guess the main idea of the game from one picture:

8) Run, jump, and hit the ball with your foot or head. The main point is to score as many goals as possible!

9) The game looks cartoonish and is unlikely to resemble football simulators such as FIFA or PES. But if you like football and looking for a simple game with short gameplay, try Football Heads. You will not regret the time spent.

11) Football players with big heads and one leg play football. Here is a wide selection of real football championships. 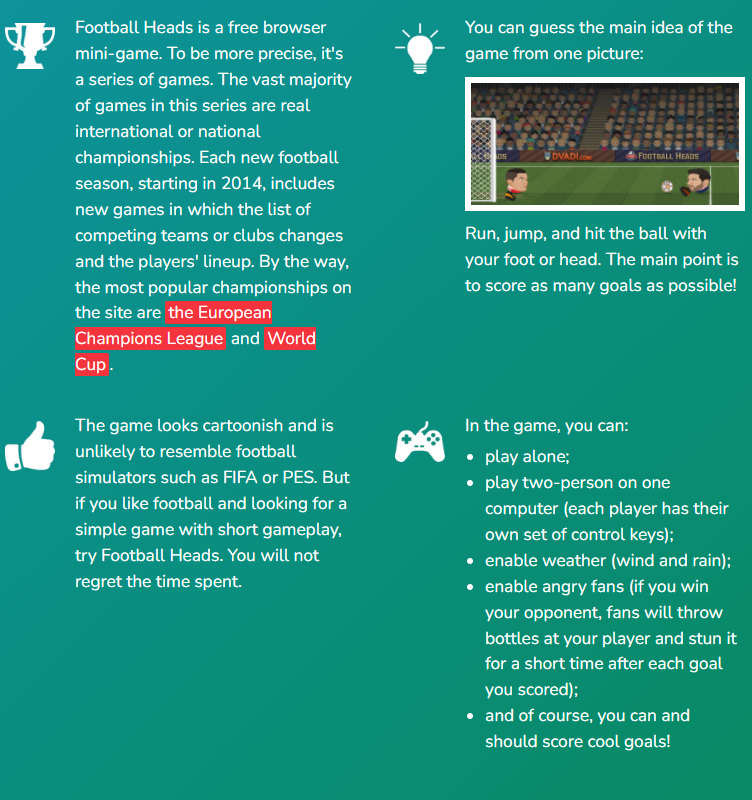 13) To hit the ball or move a football player to the right place, just click on it with the left mouse button and, without releasing, move the cursor in the right direction. Then release the mouse button to complete the action.

18) Your message could not be sent. Please try again later or send an email to [email_address].

19) Thank you! Your message has been sent.

25) All games on this page are free to use on your website.

26) This page presents games that you can freely publish on your Internet resource. Each game has a link to the zip archive with the game files. You can embed the game using the <iframe> tag, or directly embed JavaScript code, as in the example with the index.html file in the downloadable archive.

33) The page you were looking for wasn't found!

37) The site is temporarily closed for maintenance.

41) Something went wrong. Please try again later or feel free to contact us if the problem persists.

19 Play Miniball: 2019-20 Serie A, a miniature version of the Italian Football Championship.

2 That’s exactly what you need to kill 20-30 minutes of your free time.

3 2D free football game with one and two-player modes.

4 Choose your favorite team, footballer, and head to victory!

5 2D free football game for one or two players.

6 Play with big-headed and one-legged football players. How? Start the game and check it out.

7 This game will give a pleasant pastime to all football fans.

8 Choose your favorite [Italian, German, English, French, Spanish, Russian, Polish, Hungarian ...] soccer team and win the league by scoring as many goals as you can.

9 It (the game) does not require downloading or installing.

10 There is a two-player mode in the game.

12 This is a simple and, at the same time, addicting browser game.

14 Choose your favorite team and make it the champion of the country. It’s all up to you!

16 One-on-one football game: one opposing footballer against one of your footballers.

17 Show your skills by instantly switching from defense to attack.

18 Football Heads is one of the best free football mini-games.

19 Are you fond of football? If yes, then this game is right for you.

21 A big head and only one leg are the hallmarks of football players in this game.

22 Run, jump, and score goals with your foot or head, and make sure you defend your own goal.

23 Try to score as many goals as possible into the opponent's goal while not forgetting to defend your own goal.

25 The top [20] teams in [French League 1, Spanish La Liga, Italian Serie A ...] face-off in a breathtaking fight to become the champion.

27 This is a simple and, at the same time, addicting browser game in which big-headed football players with one leg play football.

28 You can play it (the game) right in your browser.

30 The top [20] teams of the [Brazilian Championship A Series, English Premier League] compete for the champion’s title.

32 Your footballer is both an attacker and a defender.

33 This game is dedicated to fans of [French, German, Italian, Brazilian, Turkish ...] football.

35 A table football in the browser.

36 A free football game, which is a small version of the 2020 European Football Championship.

37 Help your favorite team become the champion in the new season of the 20xx-xx [English Premier League, Italian Serie A, French Ligue 1 ...].

39 Choose your favorite team and attempt to become the Serie A champion.

40 An exciting game with realistic physics.

41 In this game, big-headed and one-legged footballers masterfully control the ball and score excellent goals.

43 The mechanics of the game is somewhat similar to billiards and Subbuteo.

44 Strategy, tactics, accuracy of kicking the ball, and movements: here's what you need in this football game in which five players of your team have to play as a single unit.

45 Manchester United, Manchester City, Chelsea, Liverpool. Which team will become the champion in the 2020-2021 season?

46 Lionel Messi, Karim Benzema, Luis Suárez - who will bring his team to victory?

47 Here are the top [20] Italian teams and some of the world's best footballers. Prove that the scudetto should belong to your team.

48 This championship is the best club tournament in South America.

49 Football players with only one leg and a big head. Is that even possible? In the Football Heads game, this is reality!

50 Footballers with one leg and a big head try to score as many goals as possible for the opponent's goal.

52 Play football with big-headed football players in the Italian Championship.

53 This tournament is surely the most powerful and popular international championship among football clubs. Choose a team, defeat all your opponents, and become the champion among the strongest European clubs.

54 You can play with real teams and football players in the [Polish Ekstraklasa, Russian Premier League ...].

55 Choose your favorite team and make it the champion of the world.

56 The top 47 teams from ten South American countries compete for the continental title. You have the opportunity to take part in this championship. Launch the game and make your favorite team the champion.

57 How can you play as a football player with one foot and a big head, and at the same time defend your goal and score goals against the opponent? Thousands of players around the world are doing it. Try it too!

58 In this game, football players can score goals with all body parts. But the choice is not great, since they only have a large head and one leg.

59 In this game, you can choose any team participating in the real [English Premier League, Polish Ekstraklasa …] in the 2022-23 season. Play as a football player with a big head and one leg and win the champion title.

60 This game differs from other football games because footballers in it look a bit non-standard. They have only one leg and a large head.

61 Dynamic and non-standard arcade football. This game can be played by one or two.

62 Do you have the skills to become the champion of [Spain, England, Italy ...] in the 2022-23 season? Control a football player who has to defend his goal and score as many goals as possible against the opponent's goal.

26 The spacebar does not work on many keyboards when the left and up buttons are pressed. For this reason, players cannot kick the ball while moving forward and jumping simultaneously.

27 Use the spacebar anyway

34 Previous Championship will be removed!

68 You lost the Championship!

84 The game session is over! Reload the page, please.

26) The Championship is over!